“From treating scans and not people, from talking disease and not well-being, from patronizing and not supporting people in pain, from knowing all to being ready to learn, from making medicine just a profession and not a calling – may the Good Lord deliver us”.

Besides medicine, Dr. Narayanan enjoys music, cricket and world history and politics. He credits his father’s extraordinary sense of fairness and respect for others, and Professor Alun Davies’ inspiration for teaching, research and helping patients as his biggest influences. Dr. Narayanan’s mission is to develop accessible treatment for all as the costs of medicine have left the less privileged behind due to technology and knowledge advances in healthcare. He believes in treating patients as people with fears and hopes and not just as a collection of symptoms and x-ray films.

Dr. Narayanan studied medicine at JIPMER, India in 1993 and basic surgical training at Sir JJ Hospital, India. He completed his Master of Surgery degree in 1997. In 1997, he undertook advanced surgical training in the UK and trained in gastrointestinal, thoracic and hepatobiliary surgery in Liverpool and Cornwall, followed by two years of research in transplantation in Nottingham.

Dr. Narayanan was selected for the All Wales Higher Surgical Training Program with subspecialty training in vascular surgery in Cardiff in 2002. Dr. Narayanan was awarded a Senior Vascular and Endovascular Fellowship at Imperial College, London under Professor Alun Davies (Chair of Academic Vascular Surgery, Imperial College of Medicine) in 2008. He trained at the Charing Cross and St Mary’s Hospital Vascular Units.

Dr. Narayanan pioneered the description of the differences in vein anatomy in Asians and the work on venous glue ablation for venous leg ulcers. He is a key opinion leader, speaker and Southeast Asian trainer for venous stenting, intravascular ultrasound and aortic surgery.

Dr. Narayanan has published on transplantation, vascular access, vascular and endovascular surgery and peer reviews for the International Journal of Surgery. He is the Chief Scientific Editor of Wounds Asia. He is also the author of book chapters in “Angiosomes: Applications in Critical Limb Ischemia” (2013) and “Diabetic Foot – the Asian Perspective” (2017).

Dr. Narayanan has co-supervised PhD and MSc research with Nanyang Technology University School of Mechanical and Aerospace Engineering on computer modelling of Asian aortic aneurysms. He collaborates with A-STAR on research in advanced wound care technologies and is an Adjunct Asst Professor at NUS Yong Loo Lin School of Medicine and an examiner for the final MBBS examinations. 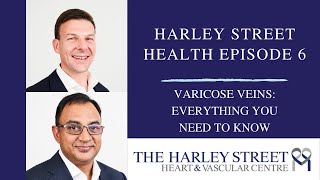 Varicose Veins: Everything you need to know
Varicose veins will affect a lot of us as we get older. They can be both painful, cosmetically unsatisfactory, and create other medical issues. In Harley Street Health Episode 6, Dr Michael MacDonald chats with our very own Senior Vascular Surgeon, Dr. Sriram Narayanan, about everything varicose veins. We discuss why we get them, and what we can do about them. Including invasive and non-invasive techniques to deal with them.
Read More